So here in the Cullen’s household we have continued to carry out some more work on our engines and machinery which does not usually get done as we are busy getting ready for Rallies and running the club events.

As we said in part 1 we had done some work on the Moffat pump that was sent to Alan along with the Moffat engine . Whilst tidying another shed we found the correct fixings to finish the pump so have added a photo of the finished pump all we need to do now is to try it one day when we have an  engine out. 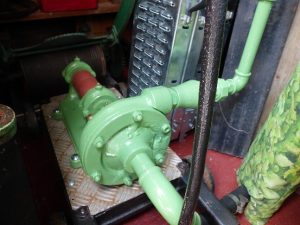 The Villiers /Lister pump set had to have a couple of gaskets replaced and whilst this job was being down the paintwork needed some attention so we did the compete job and it looks very smart again. Likewise the carrot top was looking rather scruffy as a recent photograph in stationary engine proved so that had some cosmetic work down on that. 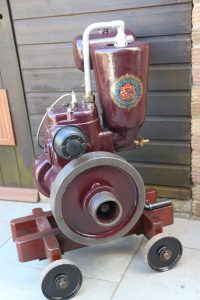 We have also included the speck pump   photo so as to show how smart that looks again. The Argosy pump that had sat at the back of the shed waiting for new gaskets to be made and repacked glands came to the front and the work was carried out and it was also decided it was in need of a repaint and now looks like it did when it was first restored several years ago. 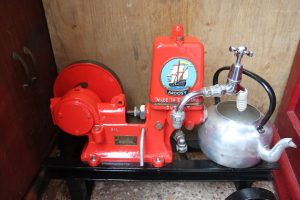 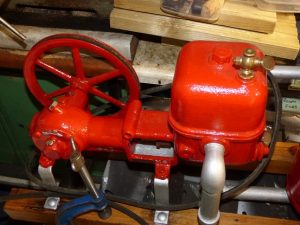 One of our trips out into the wide world post lockdown ,was to see our Friend Mick Taylor as Alan and Mick have had a long standing agreement that when it was time for Mick to make some space in his Shed he would let Alan have first refusal on a very early single flywheel Lister A , So as Mick is having to give up his engines we went and collected it so we now have a trio of early Listers. 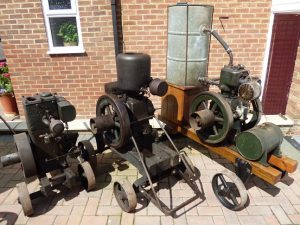 The Moffatt Virtue MV3 was put back together and repainted and reunited with its other members of the family and we have included the trio in the sun when it was finished. 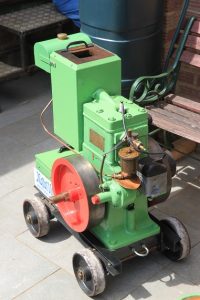 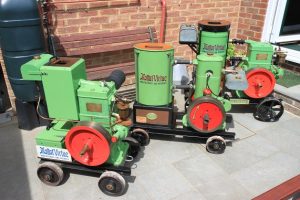 The Bamford KOO mill we have needed a reduction gear box fitted as it was running too fast . We had a couple in stock so found a couple of flat belt pulleys and fitted them to the gear box before fitting that to the mill we need to have a flat belt stitched by a very kind lady we know who has an industrial sewing machine and then we will be able to see if we have slowed it down enough, while we did this we also freshened the paintwork up . 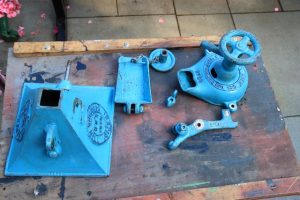 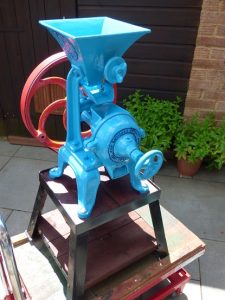 The Completed Mill with reduction gearbox 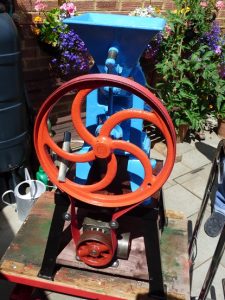